To end Australia Week let us ask a question. Where would the world be without the music coming from Down Under? Consider the cultural impact made by these bands and artists: AC/DC, Midnight Oil, INXS, The Vines, Hoodoo Gurus, The Church, Natalie Imbruglia, Nick Cave, Counting Crows and so so many others. And don’t deny the guilty pleasures of The Bee Gees, Savage Garden and Air Supply. You know you sing along at the top of your lungs to “Making Love Out Of Nothing At All” when you’re alone in the car.

Australia’s most important export may be its culture. And in truth, wouldn’t the world be a better place if we all had a little Aussie in us?

For the finale of Australia Week let’s do a flashback to one of my all-time favourite bands from the Land of Oz, Men At Work. Can’t you hear the thunder?

It’s no secret that ever since our inception your friends at Froglix have been quite enamored by the music from Down Under.  Black Knight, San Cisco, Abbe May, Sarah 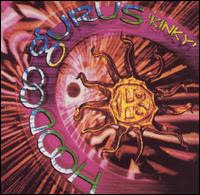 McLeod, The Brisbane Project, etc. have most certainly captured our attention and our ear, for that matter.  This new wave of indie and alternative artists are very talented but not more so the pioneers from the Land of Oz who blazed the trail before them.  It is here that we direct our attention for this week’s Flashback.   Back in the 80s/early 9os it was Hoodoo Gurus, or the Gurus as they are commonly referred to by their fans, who took the college radio scene quite literally by storm.  They dominated.  Not just in their homeland of Australia, but here in the States as well.  By successfully combining the edginess, attitude and excitement of punk with the melodic elements of pop, they created something unique…their own sound.  The combination of Dave Faulkner’s eclectic vocal style, inventive lyrics and exciting melody lines couple with Brad Shepherd’s guitar work elevated the Gurus above a number of other bands in their space vying for air time.

Narrowing it down to one (1) track from this band for Flashback was indeed challenging.  We could have selected any number of their songs from any one of their albums.  Take your pick.  It’s all good.  So, why then did we choose “Miss Freelove ’69” from their album Kinky? Honestly?  Of all of their videos, this one seemed to best capture their personality as a band.  That’s it.  That’s my reason.  Now, if you’ll excuse me, it’s time to get my Guru on.