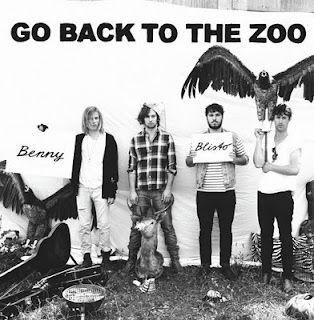 Very soon the indie world will converge on on the city of Austin, TX for a quaint little music festival that some of you just may have heard of…I believe it’s called SXSW!  Yeah, it’s only the largest indie music gathering/event of the year.  Over 2000 performers from, quite literally, the four corners of  the globe will commandeer 90+ venues from March 15-20 for a musical feast that must be witnessed in person to truly appreciate.  One of the bands who will be looking to make a big splash is a quartet from Amsterdam known as Go Back to the Zoo.  This is good news indeed.  Not just because it’s nice to know there is a thriving independent music scene there but because, until now, the only thing I was even remotely aware of when it came to the Venice of the North was their rather interesting drug policy.  So, just by their mere existence, brothers Cas (vox) and Teun Hieltjes (guitar), Lars Kroon (bass) and Bram Kniest (drums) have already broadened my horizons…fortunately, they are quite a good band as well.
The video above is for “I’m the Night (See You Later)” and it’s from their latest (and first) full length studio album, released in 2010, entitled Benny Blisto.  With punchy guitar riffs, catchy lyrics and rhythms that are steady as a train, these blokes from Amsterdam have fashioned quite an inventive sound.  One that I’d put on par with some of the top indie bands playing today.  Their sound is familiar but not predictable…memorable hooks and melodies infused with a heavy dose of indie-pop.  I like that, not a little but a lot.   Most of all these cats are amazingly tight, which is pretty impressive considering they’ve only been playing together for a relatively short time.    So, if you find yourself in Austin here in the next couple of weeks, definitely check stop by SXSW and check them out.