To end Australia Week let us ask a question. Where would the world be without the music coming from Down Under? Consider the cultural impact made by these bands and artists: AC/DC, Midnight Oil, INXS, The Vines, Hoodoo Gurus, The Church, Natalie Imbruglia, Nick Cave, Counting Crows and so so many others. And don’t deny the guilty pleasures of The Bee Gees, Savage Garden and Air Supply. You know you sing along at the top of your lungs to “Making Love Out Of Nothing At All” when you’re alone in the car.

Australia’s most important export may be its culture. And in truth, wouldn’t the world be a better place if we all had a little Aussie in us?

For the finale of Australia Week let’s do a flashback to one of my all-time favourite bands from the Land of Oz, Men At Work. Can’t you hear the thunder?

It ain’t Friday…but I figured there is no time like the present for a flashback.  From their 2008 appearance in Tokyo, Sting, Andy and Stuart rock it old school with one the all-time iconic tunes.  Such a cool version…

Check out this and other songs by The Police on [itunes link=”https://itunes.apple.com/us/album/message-in-a-bottle/id110871?uo=4″ title=”The Police on iTunes!” text=”iTunes “]!

Arguably, one of the most underrated alt-rock bands of the 80’s & 90’s, The Smithereens, to this day goes down as one of my all-time favs as I quite literally have every album and know most every song, even the deep tracks, by heart.  So, naturally, when they came to the Northern Virginia’s State Theatre a while back I just had to go.  Some may say that the band has long since passed their prime…and they’d be right.  However, these cats still rock out loud.  They are not even the least bit pretentious.  In fact, they are far from it.  While most of the alt-rock veterans would rather play their “brand new” stuff (that nobody cares about) the Smithereens plastered the filled to capacity crowd with their most notable tracks from every album in their arsenal.  It was epic.

I was fortunate enough to actually meet and hang out with the band a little bit after the show (that’s me with drummer Dennis Diken) and they were the epitome of cool.  In fact, I talked with bassist Severo “The Thrilla” Jornacion about playing the bass line to “Blood and Roses” featured above.  His response? “The first time I played it I thought I my fingers would bleed…it is such an honor to play that song.”  With all the nit-picking in the music industry today it’s somewhat refreshing to hear someone give deference to their predecessor, in this case, former bassist Mike Mesaros.

We could have picked any number of tunes from The Smithereens catalog…“A Girl Like You” or “Only A Memory” would have been the more than obvious choices…but “Blood and Roses” was one of the tunes that was instrumental in my alt-rock conversion.  Thusly, I pay homage to the song and the band today on the Friday Flashback.  Enjoy my friends

Check out all the stuff by The Smithereens on [itunes link=”http://itunes.apple.com/us/artist/the-smithereens/id529246?uo=4″ title=”Smithereens on iTunes”] !

Twas many a moon ago when a certain English gentleman, Marty I believe his name was, was here from the Great Isle visiting a friend of a friend.  I don’t think I had known him for more than (5) minutes before, naturally, I felt it my solemn duty to pester him until he told me the name of at least one band from the UK that no one was yet listening to here in the States.  After several not so veiled threats of violence he finally gave up a name.  “The Housemartins,” he said.  “The what Martins?” I replied.  This cat was setting me up for sure.  “The Housemartins,” he said again.  “It’s boppy English music played by nerdy white guys.”  Oh…this I just had to hear.

He lent me a cassette (I told you it was a while ago) and the first song I heard is featured above.  ‘Me and the Farmer’ was released as a single in August 1987 and then later released as part of what would be both their 2nd and final studio album The People Who Grinned Themselves to Death.  Quite honestly, while I dug this tune and another song from the same album called ‘Build’, the rest of the album didn’t thrill me.  It did however make me curious enough to procure a copy of their debut release entitled London 0 Hull 4.  I was (and still am) completely enamored with tracks like ‘Happy Hour’, ‘Flag Day’, ‘Sitting on a Fence’ and ‘Think for a Minute’.  The music was the furthest thing from complicated and yet seemed to sparkle with a certain brilliant simplicity that was quite intriguing.  What I struck me most, though, was that it was, and still is, instant sing-a-long music.  Take gander at the vid above and see if you don’t agree! 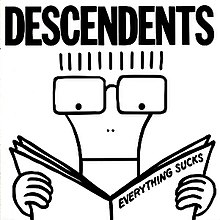 It was a Saturday, many moons ago.  I remember sitting at home and, after counting all of the ceiling tiles in the family room, quickly determined that I was bored out of my skull.  It got the point where even hard labour was starting to sound appealing. Was anyone going to call?  Finally, there it was.  Ring…Ring. I was saved! With my feet barely touching the ground I sprinted into the kitchen and anxiously picked up the receiver.  To my chagrin, it was one of my college buddies from Baltimore, MD. “What are you doing?” he asked. “Nothing, I’m bored out of my mellon,” was my reply. “How’s that working out for you?” he chided.  “There better be an invitation coming jackass or I’m going to reach through the phone and rip out your larynx.” Thankfully (and luckily for him) there was indeed an invitation.   It was to join he and some other compadres at the 8×10 Club in Baltimore that evening to see a band from NYC called Urban Blight. Who?  Never heard of them…but heck anything was better than doing nothing.

What I remember most was that as soon as those cats hit the stage the air was suddenly electric.  It was like everyone knew what was coming.  The drummer set the tone immediately with a phat groove that became the foundation for  “Knock You Out” and I became insta-fan.  Loved it.  The mix of funk, ska and new jack swing was simply phenomenal and while “Love Bites” remains my absolute fav, the song featured in the video above, “Get Closer”, was a close 2nd.