For the Flashback this week we present for your listening and viewing pleasure the Titans of Two Tone…The English Beat. From 1978 – 1983, Dave Wakeling, Ranking Roger, et al were at the epicenter of all that was Ska and the (3) studio albums released during their run have become rude boy classics.  “Mirror in the Bathroom,” from I Just Can’t Stop (1980) is one of my absolute favourites and, even though  the original line up has long since broken up, Mr. Wakeling  still gets a certain swagger in his step when this one comes up on the setlist.  Take a listen…and you’ll see why.

Click the play button below to check it out here, catch it as part of the global broadcast or, better yet, pick it up on iTunes! 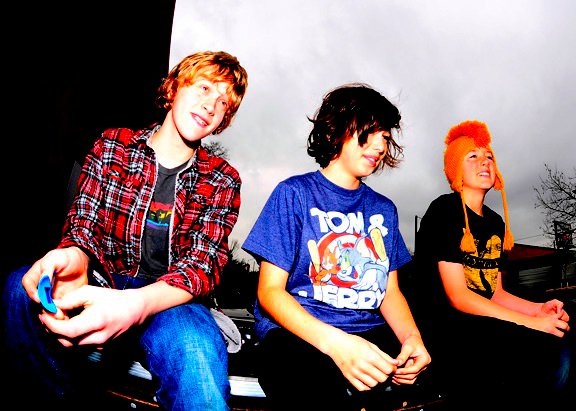 Dig it…new vid from S3K!  BTW…this is not a cover a Silver Chair’s “Tomorrow” so if that’s what you were exepecting we are more than happy to disappoint. These cats are not only onto something…they are on the rise fo sho.

listen now:
Without You    Violence

I had to do some double checking of things with Eureka Stockade. For example, are they really from Cambridge? The one in England?? I have to say, the sound is quite American to me. The pedal steel guitar playing a prominent role in “Without You” does make me think Nashville. And other tracks like “Violence” and “All Alone” made me seriously wonder if they could be from Athens, Georgia. I actually did double check….it’s still Cambridge, England.
And with tracks titled “All Alone”, “Without You”, and “Through Every Darkness”, one might be afraid these could be country-western songs where you lost your job, your wife, and worst of all your dog. Don’t worry; they aren’t. Eureka Stockade is a solid four piece, delivering vocally driven, well-crafted, alt-rock tunes with a decent range of different sounds. “Without You”, with that pedal steel guitar is a masterful acoustic ballad and really is a bit country. “Violence” is on the other end of their spectrum, being more Athens-inspired rock. If you like both of these tracks, then you should be happy with everything in between.

It’s no secret that ever since our inception your friends at Froglix have been quite enamored by the music from Down Under.  Black Knight, San Cisco, Abbe May, Sarah McLeod, The Brisbane Project, etc. have most certainly captured our attention and our ear, for that matter.  This new wave of indie and alternative artists are very talented but not more so the pioneers from the Land of Oz who blazed the trail before them.  It is here that we direct our attention for this week’s Flashback.   Back in the 80s/early 9os it was Hoodoo Gurus, or the Gurus as they are commonly referred to by their fans, who took the college radio scene quite literally by storm.  They dominated.  Not just in their homeland of Australia, but here in the States as well.  By successfully combining the edginess, attitude and excitement of punk with the melodic elements of pop, they created something unique…their own sound.  The combination of Dave Faulkner’s eclectic vocal style, inventive lyrics and exciting melody lines couple with Brad Shepherd’s guitar work elevated the Gurus above a number of other bands in their space vying for air time.

Narrowing it down to one (1) track from this band for Flashback was indeed challenging.  We could have selected any number of their songs from any one of their albums.  Take your pick.  It’s all good.  So, why then did we choose “Miss Freelove ’69” from their album Kinky? Honestly?  Of all of their videos, this one seemed to best capture their personality as a band.  That’s it.  That’s my reason.  Now, if you’ll excuse me, it’s time to get my Guru on.

Froglix welcomes Georgia’s Fried Goat to the broadcast with a few select cuts off their latest album. Bon Appetit is a feast of southern inspired flava that mixes healthy portions of americana, folk and southern rock with a dash of  blues and a pinch of country twang thrown in for good measure.  “Maybe Today” starts off a little Neil Young-esque…but only for a second, I promise.  As soon as the hook kicks in with “Maybe today the clouds will fade away” it’s accompanied by a subtle harmony that makes it all Fried Goat.  The jump to double time for the guitar solo was nice juxtaposition and really makes the wailing sound of the guitar stand out quite nicely.   “Misery is Optional” and “Henry” are notable tracks as well and further capture the essence of the band’s core sound.  However, the most interesting track was “Bulgarian Rhapsody.” This particular song is a complete departure from the rest of the album but as the “what were they thinking” moment passed,  I really came to appreciate this particular tune.  I have no idea what they lyrics are but they sound good and fit nicely with the edgy bulgarian folk thang these cats are throwing down.  The performance is solid and their crisp sound resonates with a warm sense of reality that is completely genuine.

If your ears have a hankering from some southern type comfort food this summer…get yourself some Fried Goat!

iTunes: [itunes link=”http://itunes.apple.com/us/artist/grimus/id125255446?uo=4″ title=”Grimus”]
My favorite band from Romania (ok…the only band I know from there) have a new single out, and once again Grimus delivers in spades. “Face The Light” draws you in from the beginning with its steady drum intro and progressive chord changes and then builds into their signature angst driven melodies. Again, a comparison to The Killers is fair, but as I stated in my first review of Grimus, the sound is their own refined mix of rock and mood.
As I also mentioned in my first review, I have yet to hear a track from them that I don’t like. You really need to check out Grimus on iTunes and support the best alternative rock band from Romania.

This past week saw the return of record temps here in these the Eastern United States. Officially it’s still Spring but there is no doubt Lord Summer is here and, apparently, he’s pissed.  It’s freaking hot out there my friends. To combat the unpleasantness of the weather this past week, your friends at Froglix offered up some cool jams.
New music from Race You There kicked things off this past week as Drago dropped the 411 on this the latest addition to the broadcast.  Thurdeen followed shortly thereafter with the downlow on GoldRat’s newest single, “Marcus Lives” and we topped it all off with an epic featuring The Stone Roses.
Check back next week for some cool tuneage…

Check out The Stone Roses on [itunes link=”http://itunes.apple.com/us/music-video/fools-gold/id325818392?uo=4″ title=”Stone Roses on iTunes”]

The Stone Roses self-titled debut  album was released in the Spring of 1989 and although the track featured in the video above was not on it, there were quite a number other of notable tracks including, but not limited to, “I Wanna Be Adored” and “She Bangs the Drum.” Classics one and all. The album received critical acclaim and there are many today (including yours truly) who still consider it to be one the best British albums ever released.

Founding members Ian Brown and John Squire had finally broken through and had nothing but an open road ahead…that is until they  entered into a nasty dispute with their then record company, Silvertone Records.   Finally, after trip through the British courts, the band emerged victorious and began work on their second and final album. Second Coming was released in 1994 and it too had it’s share of memorable tracks…but none more so than “Love Spreads.” There are plenty of “Manchester purists” out there who would argue “Fools Gold” was band’s crowning achievment.  I, however, would respectfully disagree.

It’s somewhat surprising to think that The Stone Roses only released (2) albums before disbanding in 1996 for, you guessed it, artistic differences.  Even so, in the short time these cats were together they put out some seriously good music.  Have groovy Friday my friends…

It’s no secret.  Music is everywhere.  One could travel to the far reaches of this our beloved planet Earth and could easily find people from the remotest locales expressing themselves through some sort of musical medium.   As has been said/written about many times before on this very website…there are plenty of good bands and talented songwriters out there but what really catches our ear here at Froglix is good ole fashioned originality. Anyone can be a good copycat (just ask Blink 182, Sum 41 or any other “insert emo-punk band” here) but it takes a bit of a different breed to swim upstream and define something that is truly your own.  Thankfully, our newest addition to the broadcast has done just that.

Tucson, Arizona’s Race You There is a four-piece alternative/indie-pop band that is more than just good.  They are truly original and their latest EP, aptly entilted Catalyst, is an excellent example of talented musicians pooling their collective energies enroute to creating something that is unique and imaginative.  From the melancholy opening track, “Low Armaments” to the upbeat “Casualties” to the quirky/syncopated riddim of “Dear Lewis Fry” and ending with the sparkly sounds of “White Flag,” this EP is awash in rich compositions further highlighted by excellent dynamics and strong vocals. I was impressed not only with their performance, which was stellar, but their overall approach to songwriting.  It’s quite poetic really and, dare I say, you will be drawn in from the jump.  This is indie done right.